Home / Close-up on the use of XBRL in financial reporting

Close-up on the use of XBRL in financial reporting 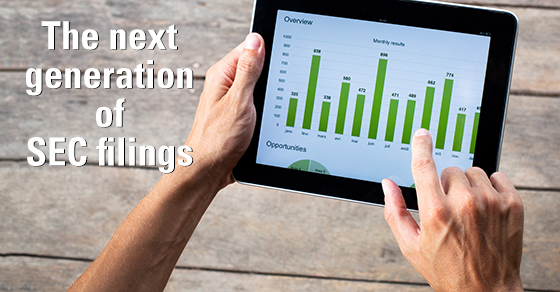 XBRL is an interactive data format that allows financial statement information to be downloaded directly into spreadsheets, analyzed in a variety of ways using commercial off-the-shelf software and used within investment models in other software formats. In theory, the SEC hopes the use of standardized interactive data will make financial information easier for investors to analyze and assist in automating regulatory filings and business information processing.

But, in practice, XBRL reporting has so far fallen short of the SEC’s expectations. In addition to submitting “XBRL Instance Documents,” public companies must continue reporting with PDF documents. PDFs are more familiar to financial statement users and, therefore, tend to be regarded as the official version that most analysts and investors use. This two-stage financial reporting process adds significant financial preparation costs and contributes to tagging errors and other data quality problems.

So far, about 30 public companies have voluntarily used inline XBRL in the past six months. Voluntary use of inline XBRL expires in March 2020, but the SEC is currently considering making inline XBRL mandatory. If that happens, the effective date of the changes probably won’t be for several years.

In the meantime, the voluntary period of inline XBRL filing gives the SEC time to evaluate its usefulness, consider exceptions, and resolve technological and practical issues before mandating its use — or abandoning the concept. Contact us for more information on XBRL and whether the inline format could help your public company reduce reporting costs and errors.